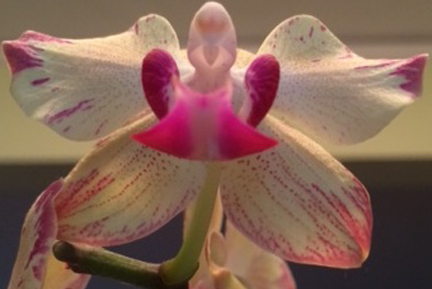 This is one of three phalaenopsis orchids rescued from the clearance rack of a big box grocery store back in 2014.  I took dozens of photos of the flowers promptly after bringing them home, which was a good thing, as this particular plant died very quickly from what I guessed to be crown rot.  When backlit, this orchid’s column gave the illusion of containing a large eye, topped by a smaller, sightless face.  The sides of the lower lip seemed to reach out like hands poised for grabbing.  I knew this image would make a strong print, but balked at the idea of planning an etching from a photograph.  I’ve learned from experience that the meticulously detailed planning of an etching is always best accomplished when drawing directly from the model and not a blurry photograph. I decided this image would translate better to the graphic, stylized lines of a relief print. 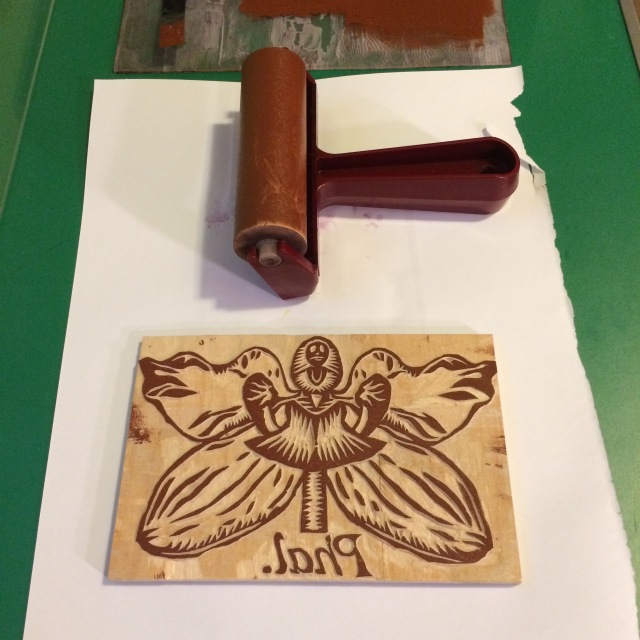 Above is the inked and completed wood block, ready for its first test print.  Considering that some of my relief carving tools hadn’t been sharpened since their purchase in 2005, this block turned out remarkably well.

I pulled several prints combining watercolor monotypes with the relief print, and this was the most successful of the lot.  I discovered that registration was quite difficult, since the paper is dampened during the monotype printing and it shrinks considerably after drying. I thought a solution to the problem might be to re-soak the monotype print and run it through a press with a clean, blank sheet of plexiglass.  This would presumably re-stretch the paper, making it close to its original size.  As it turns out, monotypes made from dissolved Aquarelle crayons are NOT water resistant after they dry and cannot be soaked. Next, I’ll try printing the relief layer while the monotype is still wet, before the paper has a chance to shrink. Another avenue to explore is paper selection:  are different papers less prone to shrinkage?